Studying the Bolognese choreographed sword-fighting exercises, the assalti, is to me about two things. First I need to dissect the information left by the masters in the description of the assalto itself, understanding as closely as possible the way each action is supposed to be executed and taking note of all aspects of the writing that can provide further clues to help interpret the sequence. In essence, this is studying closely that which we know about the assalto for certain.

The second is turning the information into something useful that can be physically demonstrated, taught and utilized in actual fencing. This process is difficult since the original descriptions don’t give out every detail and leave out important things such as the opponent’s actions. I would like to think that this is deliberate and that I am allowed and encouraged to fill in the gaps myself, but it can just as well be that the writings were always only intended to help those who have had personal instruction from the author or his followers.

Regardless of the difficulties, if we accept that our interpretation will never be certain, I am confident that these writings can be turned into something beautiful to watch and useful in application, something that the original authors would not look at in complete disdain.

What is an assalto

In the descriptions of the assalti we find information not only of the steps and strikes but also the context in which the assalti are to be performed and what general attributes they have. If we consider Antonio Manciolino’s first assalto for the sword and buckler (Primo Assalto di Spada e Brocchiero) we find him telling us that the assalti are meant for training and they consist of three parts: 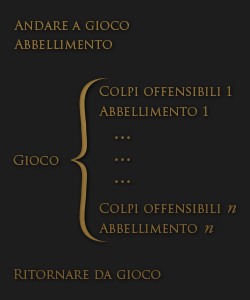 The approach is done, while at distance from the opponent, in order to get to a distance where blows can be exchanged. The approach ends with an embellishment (abbellimento), which is a short set of movements that are supposed to “render the play beautiful”. As Manciolino carefully reminds, the embellishment is repeated throughout the assalto as a way of dividing the form into smaller parts (and possibly making it longer and simultaneously easier to learn). All actions in the approach are done into the air and not against the opponent.

The play itself consists of a number of attack sequences targeted at the opponent. These sequences are only described from the performers viewpoint, so we are left to speculate about what the opponent’s actions are, if any. Each sequence is followed by the embellishment.

The return is done to the air just like the approach, only that the actions are done while retreating from the opponent. The return does not end with the embellishment.

What happens in the assalto

In the primo assalto there are four attack sequences, five embellishments and the approach and the retreat. This way we could further divide it into eleven parts. Each of these parts can also be divided further into single actions or short combinations. But in doing so we unavoidably start interpreting the actions, as we have to choose at which points we divide the text into smaller parts, breaking its flow.

What follows is the way I divide the assalto into parts, and I have translated the instructions into English and somewhat simplified the text. If you are interested in researching the tradition I auggest you check back against the original text, but if you only wish to try the steps out or have no problem using second-hand material I’m sure it is easier to follow this text than the original Italian.

[Click here to see the steps of the Primo Assalto and a video of each part.](http://marozzo.com/primo-assalto)
# Notes on the translation and interpretation

The capitalized words are there to make it easier to notice the important actions in each part. I have tried to divide the sequences according to steps, but at some places there are so many actions done during one step that I decided to separate them into smaller bits.

I tried to maintain instructions for when something is to be done immediately, but left out some other instructions that I found of less value. Read the above as a simplified version instead of a word-to-word translation.

I maintained the direction of the steps and the instruction to make long steps (grande passi) but decided that in each case where the front foot is reduced backwards into a position with relation to the back foot, it is meant that the feet are brought together as in the illustration of Guardia Alta by Marozzo. The Italian terms appo and lungo could be transleted to mean that step is behind and not beside the other foot. Sometimes the instruction is to bring the feet a pie pari, which could mean a just, easy distance or that the feet are together. For consistency I have taken it to refer to feet being close together.

In the approach, when the buckler is held like a mirror I believe the boss is actually turned toward your own face. Marozzo gives evidence towards this in his own version of the assalto.

I believe the ritocco di brocchiero is an action where the boss of the buckler is beat with the pommel of the sword. This way it seems to flow nicely and Marozzo once details using the pommel to strike the buckler in his version of the form.

This still shows that there are possible variations that could still follow the text, and unless we get more evidence I think it is fair that we can choose the one that feels best for us. Please see my Youtube channel for videos of the Primo Assalto.

I started practicing the assalti some four years ago, and before I now started again I had perhaps two years break without forms practice. Still, because of all the other training I have done, learning these forms is now much easier than it was two years ago.

Here are a few tips that have helped me so far in practicing:

It is unfortunate that Manciolino does not clearly tell us how the pair exercises should be done. We are left with basic questions such as should the partner be hit once per sequence, by all blows or not at all? What is the distance between partners, is it okay to adjust it or is there once single way it should be done? Are all the actions attacks or are some of them parries or beats on the opponent’s blade? Is the buckler used to parry actively?

It is too early for me to present a complete, suggested interpretation of the attack sequences in Manciolino’s Primo Assalto, but here are some things to consider:

And finally, here is the challenge: I would like to see more assalti and more Bolognese material online. Please ask if you have any questions or comments, and if you have your own take on this then please share!