I remember being asked to define the meaning of the word tempo in a fencing context years ago, and failing miserably to give a simple answer. Having learned from the experience, today this question is one of those I can confidently give a crisp answer.

A tempo in Bolognese fencing can mean one of two things:

1. An opportunity to safely wound your adversary 2. The measure of a fencing action in time and space, in relation to - the adversary’s action or - itself
But the definition on its own may not be so useful, especially to anyone who may not have been familiar with it to begin with. To me it gives a certain odd warm feeling (again probably due to the fact that had I known this years ago, I would’ve done better when asked about it), and I hope by explaining this a bit further I can share some of that feeling.

An important aspect of fencing is to minimize the role of chance. The more fights you engage in the more likely it is that you will run out of luck and receive an injury. If you have any free fencing experience you must be familiar with the chilling thought that, even if you scored more hits than your partner, you still received many attacks that could have been lethal in earnest. If not, then you must really be good!

The mentality in an earnest fight calls for great judgement and cautious comportment. Any time you attack your adversary it should either be to wound him so that you don’t get hit (remember the saying: “per dare e non ricevere”) or to make him move to a position in which you can wound him without being hit.

This moment and setup, in which you can safely strike is a tempo. An opportunity to strike. Understanding these opportunities comes in two stages: first you need to know what they are, and then you need to learn how to know, or feel them during a fight.*
*

Luckily the tempi were written down by some of the masters, and they are (paraphrased from Giovanni dall’Agocchie)

These are generally universal, and I’m sure martial artists from different backgrounds would recognize these just as well as sport fencers.

The second part, knowing and feeling these opportunities during a fight is more tricky. I can’t teach it to you, nor could the masters 500 years ago; the only one who can is esperienza, experience.

Some ideas on how to better learn to apply these is to take time to understand fencing through the guards (and the strikes that lie between them). This way you can “easily” map information to what you actually see in front of you. Certain guards only have certain openings and actions available and so on. This should make the neural processing quicker, and as a bonus is a historically documented approach.

You can also combine this thinking with the idea of provoking your opponent. It is common knowledge that your nervous system goes through a process of recognizing a threat, deciding what to do with it and then acting, but you should apply this process not only to threats by your enemy but also to the opportunities. For example, if your plan is to feint with a cut to his left side in order to strike him on his right side, you should recognize the parry as an opportunity for the second cut. If he doesn’t parry, you should be aware of it and just hit him directly, or beat his sword or close in to grapple (or whatever it is that you have trained yourself to do as an adaptation of the initial design). 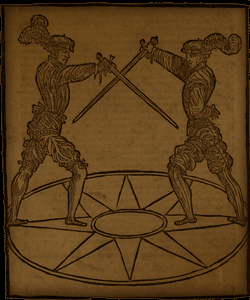 What about the second definition, then?

16th century was not a period of absolute science such as ours today. Sure, people could count and measure all sorts of things to surprising accuracy, but fencing was not among these. Even today, if you engage in a discussion on fencing with an engineer (or if you are an engineer and engage in one) the idea of accurately measuring everything that goes on in fencing usually comes up at some point. Results are usually comical, and it becomes obvious that there are too many variables to take into account.

Still, there has been a need to somehow measure swordsmanship both for practical reasons and to elevate it among other arts and sciences.

The concept of a fencing tempo is derived from Aristotelian physics. A motion is defined by the stillness that precedes and that follows it. In fencing terms, a guard represents stillness and a strike that lies between two guards represents a motion.

A motion can be further divided into smaller parts, and this is done by splitting the motion in two and calling these parts “half”.

Mandritto
Literally "right hand". Refers to strikes that originate from the right (sword-hand) side of the fencer. Mandritto is a roof term for these cuts, but on its own it refers typically to a downwards diagonal cut from the right with the true edge, a mandritto sgualembrato.">mandritto) all the way to the ground is called a complete tempo (tempo intero). The half of it, a strike that ends with the point in line is called a half-tempo (mezzo tempo).*
*

Important aspect of this is that a motion in space is also a motion in time. In fencing theory, there is no acceleration nor external forces in play: the longer the distance traveled the longer the time passed and these two go hand-in-hand. Therefore, a half-cut is quicker than a full one.

The division of everything into full and half is taken further by dividing steps, the turn of the hand and many other aspects similarly. This is likely to be a pedagogical device that teaches the understanding of timing and acting as a naming convention for various actions.*
*

The Anonimo Bolognese goes as far as to say that:

Finally there is the practical aspect that combines the five opportunities in which to strike with the theory explained above. And this is done in the spirit of the saying: to give and not to receive.

My description of the tempo in relation to the action of your adversary is very much the same as how Tom Leoni describes it in his essay on the tempo, credit for definition should go to him (even if he would choose to attribute it directly to the master Salvator Fabris).*
*

Let us consider that your action (tempo) is either an offense or a defense. In order to be successful,

This surely would have sufficed as an answer to the question years ago, but to be honest there is a little more to the subject still.

Like some 17th century masters, the Bolognese masters hinted at how footwork applies to the concept of tempo. There are also the mezzo tempo and contratempo, that are difficult to define, and the way how full tempi are described as perfect and half imperfect, and how this ties into the discussion of measure and the ever-favorite topic of gioco stretto and gioco largo.*
*

However I will discuss these in a later post. The information here should work as a good foundation in the meantime.