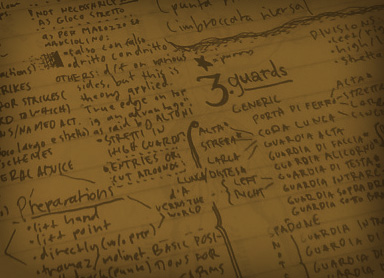 While fencing with friends at the training hall it is easy to forget how different the fencing would likely feel if it were for real.

Depending on the context there might be very different set of options available. Some ideas that are common in friendly play would probably be out question: very few would approach a serious situation with the aim of trying out new techniques and exploring various approaches.

Most of the tactical instruction within the Bolognese texts are given in the introductory paragraphs preceding the actual technical instruction. This convention is common to Manciolino, dall’Agocchie and the Anonimo whereas Marozzo structures his text a bit differently, writing out more of a guide to a master on how to instruct new students.

There is a great deal of similarity between the three introductions, dall’Agocchie and Manciolino sharing many common themes. Anonimo adds depth to the instructions, being longer and more complete than the two others which are more list-like.

From these instructions and from picking up clues from the technical material (which Marozzo occasionally mixes with similar precepts) I have tried to map out how to carefully and according to the rules of the art one could safely approach the fight regardless of the context.

In single combat with your adversary, the first task is to assess him and to gather as much information as possible, so that you can design your actions accordingly. Things to look for  immediately are (should you have absolutely zero knowledge of your opponent beforehand)

By watching his guards you can tell – in a very rough way, what he intends to do. If he is right handed and we assume a fight with single-handed swords without companion weapons, a left-foot forward guard signifies an offensive attitude. A raised sword (a high guard) signifies the same, as does a guard where the sword is held on the right side. The reverse of this, a right-foot forwards guard with the hand low and on the left side is primarily defensive.

A cunning opponent will of course hide his true intentions, and these rules don’t always apply, so careful judgement is always called for.

In addition to the precise guard you need to notice whether his point is in line, or in presenza, threatening you. This is probably the biggest factor in your decision on how to approach. Before giving examples on this I would like to remind that there were two types of fencing done by the 16th century Bolognese swordsmen: that for play (il gioco) and that for actual combat (il combattimento). In play, more cuts, movement and general flamboyance was expected and taking risks was often a good approach, while fencing for life required more caution and conservatire actions. Sometimes rules were used to direct the fencing to create a certain aesthetic, something that may have been of relevance in judicial duels but certainly not in skirmishes or self-defense.

Keeping the point out of presence is to refuse the opponent from finding your sword. It is to keep it hidden so as to strike like a scorpion or to invite an attack while having a clever defense planned.

Keeping the point in presence is to measure distance to the opponent, to force him to act against your blade before reaching you and to keep him from rushing in.

In Bolognese swordsmanship there isn’t always a clear line between the attacker and the defender, but the sources often speak of the *agente *and the patiente, the initiator of a given action and the respondant.

Should you choose to act as the agente, when your opponent has his point in presence your options are to

If your opponent has left an opening, while still keeping the point up you may also attack with a cut or a thrust to this opening, given that you keep a careful eye on his sword. This attack would usually be a feint designed to draw a parry.

If however he keeps the point low or high, remaining completely open you do not have the option to engage or beat his blade. You then have to

In either case, if you choose to approach your adversary with your point in presence by way of the stringere, he has three options:

This concept plays little role in the Bolognese corpus but it is essentially what the rapier texts of the following century consist of. Hence its importance can not be underestimated. There are ways of dealing with each of these responses, such as driving him backwards, performing the sfalsata, dipping your blade to the other side of his (later known as the cavazione) or to parry his attack or striking him in contratempo, during his attack, parrying and striking simultaneously.

Sometimes your opponent does not give you a chance to act as the agente, but instead they pressure you to respond to their attacks or designs. Keeping your sword in presence offers an additional layer of security, but before anything else you should be careful to see whether your opponent intends to

In the first case you need to recognize the type of provocation he is likely to do and to counter it. There are numerous examples of this type of exchange in the sources. Firstly you need to position yourself so that you limit the opponent’s options. By settling into a guard you open certain lines and close others, thus already limiting the options of your adversary. Generally the provocations fall into the following categories:

Generally, in the case that your opponent seems to be operating under the rules of the art and not striking wildly, it would be safe to assume that his first action is a provocation and not a direct attack, unless you yourself manage to fool them into believing they can overcome your parry with speed or strength of their initial attack. With the Bolognese sword, I would say this is unlikely.

Therefore, if they strike or thrust, you must expect this action to be a feint. Even if you made contact with your initial parry and had not gone too far out of your way in parrying, it would be unlikely that you could land your riposte, since your opponent never intended his initial strike to reach its target, but had his mind already on the next action. For this reason you must plan to break his design either by

Against the other types of provocations the rules are fairly simple. Where he intends to have you attack you execute a feint (so that essentially you become the agente) and work from there. Against the beat you perform a sfalsata, avoiding his beat and then attack either directly, with a beat or by way of a feint.

Lastly, against each provocation you can step back to buy yourself more time, but instead of escaping in panic you must retreat only in order to gain an advantage.

There is no point going into more detail on the provocations and their counters now. There are numerous examples in the sources but as dall’Agocchie mentions, these need to be learned in practice. While they sound simple in written form, there are so many variables in a sword fight that the only way to truly understand how to use and how to counter the provocations is to accumulate experience from fencing with various people.

Now if instead your adversary attacks directly without provocations, you should not attempt to parry his strikes but to let them miss, avoiding backwards, and then responding with your own attack. Or you can stab at his face or chest while he is preparing his strike. Thirdly you can wound his hands while he is throwing his strikes if he leaves them exposed.

While evading these strong attacks, it is advised to “feint a parry”. This way your sword is ready to cover if the opponent changes his strategy suddenly and it may have the effect of directing the attacks to miss since it is common for an untrained fencer to change the aim from your body to your sword if you lift it up.

Doing the evasion you do not wish to let the attacker make contact with your sword or to accidentally hit you in the hand or arm, or to let him run you over.

Before blows are thrown, while still measuring your opponent you can try to feint, invite or provoke while still safely out of measure in order to see how he responds. If he is not actively rushing in, this “tasting” can yield important information. You may even be able to discern a pattern in his actions and if you can think quick enough you can design a way to overcome that pattern. This sort of approach greatly reduces the role chance has in fencing.

Lastly, if your opponent is careful and fearful, escaping you and trying to evade your actions, you should convince him to be more active. You can use invitations and offer him tempi, that in reality are false.

You can also act as if you were avoiding him, going backwards and thus encouraging him to attack — only to change the rhythm and direction when he finally does so.

These ideas are largely still work in progress. I hope I will soon discover exercises to better demonstrate each of these aspects and to be able to teach a physical understanding of them, that can then be applied in free fencing.