Before visiting museums in Italy and seeing how many there actually are still preserved, I thought the rotella was simply a curiosity and something the Bolognese masters taught in attempt to live up to the ideals of the ancient world, where big shields were part of a soldiers standard equipment. 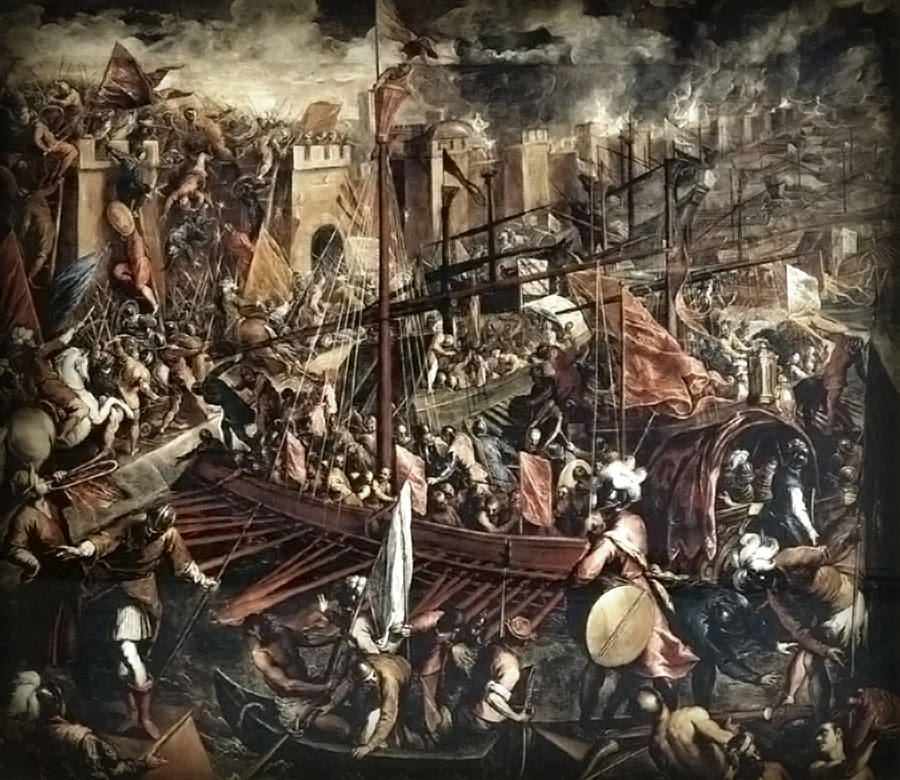 But having seen tens of these round shields with a diameter slightly more than forearm and hand’s length, made of various materials, I started thinking they must have still been an actively used weapon in the 16th century. The stunning paintings decorating the halls of the Palazzo Ducale in Venice further confirmed this assertion. But before examining these paintings more closely let us have a very brief look at where the rotella stands in the Bolognese (and 16th century Italian) fencing culture.

The small buckler (brocchiero piccolo) was the sidearm issued to play with blunt swords (spade da giochi) by both Marozzo and Manciolino, perhaps because it’s small size emphasized skill in using it and for encounters with live blades (spade da fili) it would have offered too little protection. For these situations, a larger brocchiero grande or a targa, a square-shaped shield with channels to catch the opponent’s blade, were favored.

Unlike these shields gripped by a centrical handle, the larger rotella was attached to the forearm with leather straps, the first attached near the elbow and the other gripped with the fist. Some suggest the fist-strap could also have the wrist pulled through it to leave the hand able to operate a weapon, but I personally don’t find it comfortable.

The rotella is covered by Marozzo, Manciolino and the Anonimo Bolognese, and while it certainly is not of primary focus, there is enough material to re-create the basic principles of its use. Steven Reich has extracted all of these actions and compiled them to a handy PDF for convenient learning.

The rotella is more stationary than the smaller side-arms, but in exchange it offers more protection. It effectively shuts out the primary line of attack (that of a diagonal descending cut from the right, a <span class="glossaryLink cmtt_Strikes" data-tooltip="

Mandritto
Literally "right hand". Refers to strikes that originate from the right (sword-hand) side of the fencer. Mandritto is a roof term for these cuts, but on its own it refers typically to a downwards diagonal cut from the right with the true edge, a mandritto sgualembrato.">mandritto sgualembro) but leaves the feet exposed. A notable part of the material focuses on leg cuts, even as far as to describe feint-parry sequences only targeting the legs.

In addition to the sword and rotella combination, we see it used together with some shafted weapons, either used separately or by using the the left hand to grasp both the rotella and the point-end of the shafted weapon.

Due to it’s size the rotella was probably not convenient enough to be carried around regularly, but it retained it’s place in the duel at least until the 17th century, Ridolfo Capoferro including a few examples of it used together with a rapier. This might not be so surprising as Capoferro has other references to Bolognese (or similar) 16th century material in some of his terminology and actions. In the 16th century the rotella is covered by other masters as well, such as Camillo Agrippa and none other than the Florentine master Francesco Altoni who gave us some interesting advice on the use of the buckler.

As expected, Altoni describes how to use the rotella in combat, but he does not leave it there. He emphasizes the role of the rotella in attacking the city walls, when scaling the ladders. In his own words (translation is rough and might need revision, but is enough to sketch out his ideas):

…but since it was said at the beginning of this chapter that [the rotella] is helpful in climbing over a wall on a ladder, for covering one ought to lift the rotella high, clinging to the ladder so that the rotella stays over the head and body like a roof sliding in place of the arm and the upper arm against the left temple, so that no weight thrown over the rotella will hurt the head, at least not much, and that stones falling on it will slide down. The right hand armed with a sword or otherwise, stays low and pointing up, holds on to the ladder and is ready to wound upwards. The left hand in holding the ladder shows clearly how useful it is to hold the hand as close to the rim as possible, not only to conveniently grasp the ladder but being on the ground also hafted weapons and others that there may be.

Click to read the original Italian text
> (50v) …ma perché si disse nel principio di questo capitolo che l’è utile a salire in su le muraglie per le scale coprendosi si debbe sapere che in tal caso si ha alzar la mano della rotella alta appiccandola allo scalare della scala in modo che la rotella stia sopra ‘l capo, e sopra la persona a guisa d’un tetto che caschi a sdrucciolo per il luogo del braccio, et alla parte prima del quale verso la spalla ha da essere appoggiata la tempia sinistra, a fin che cascando peso alcuno su la rotella, non venga offendere il capo, o al manco a non lo offender tanto, e che i sassi che caderanno su la rotella sdrucciolino giù sendo lei pendente, e la man destra armata, o di spada, o d’altro, stia bassa con la punta in su da poter abbracciare la scala e spignere in su per ferire quando sia il tempo, la mano sinistra che piglia la scala mostra chiaramente di quanto utile sia il far la presa della mano nella rotella tanto verso l’orlo, che la possa con molta comodità pigliare non solamente la scala, ma sendo in terra ricorre un ‘arme in asta o altro che vi fussi.
If we now take a look back at the painting of the siege of Constantinople by [Palma Giovane](http://en.wikipedia.org/wiki/Palma_il_Giovane) above, we notice a figure scaling a ladder on the top left corner just the way Altoni describes.
I don’t doubt there is more artwork to be found depicting the technique, but let us end now with an image by Niccoló degli Agostini of the siege of Padua, where there is a man beside the city wall covering himself with a rotella, looking as if he was searching for something. Perhaps he is looking for a ladder to scale?
![](http://i0.wp.com/res.cloudinary.com/marozzo/image/upload/v1468449956/agostini_mc5s0g.jpg?resize=454%2C645 "agostini")
# Updates to this post
- *September 18th 2012: *Piermarco Terminiello brought to my attention that mentions of rotelle are not all that uncommon in rapier texts, for example by Pallavicini in 1673 (where a center-gripped rotella called *rotella barcelonesa* is used) and by Terracusa e Ventura in 1725. - *September 20th 2012: * Andrea Morini noted that the painting of the siege of Constantinople featured here is in fact by Palma Giovane and not Tintoretto (as I had originally thought). He also reminded that Altoni speaks of the rotella being useful to carry around day and night, especially in case of a stone-fight (I’ll try to find more info on the stone fights later). I had not mentioned this earlier because I thought that it would be unlikely for someone to actually carry the shield with them, but this of course was just stupid ignorance on my part. I should have realized that just as I used to carry all of Guy Windsor’s swords around ([he didn’t do everything by himself after all](http://guywindsor.net/blog/?p=183)), no self-respecting *messére* would have done so in 16th century Florence either. Luckily Guy never had a rotella. Francesco Lanza was kind enough to provide an [image as evidence](http://demodecouture.com/wordpress/wp-contents/uploads/2012/01/English-gentlemen.jpg). So, thank you gentlemen, I stand corrected on both accounts!
Login to leave comments.
comments
You've successfully subscribed to Marozzo.com!
Great! Sign up succesful.
Welcome back! You've successfully signed in.
Success! Check your email for a login link.