The above is a paraphrased quote from the Anonimo Bolognese. It means that the hand, if wounded, can no longer protect the body and its more vital targets. But if the body is wounded it does not necessarily prevent the hand and the sword from still functioning against you.

The other thing is (and yes, a quote on this exists in the Anonimo as well) that the hand is often the most advanced target and thus easiest to reach. This is just common sense and there should be no confusion about it: cutting the hand is not "hand-sniping" any more than cutting the deeper targets is "sniping" them. Every mistake the opponent makes can and should be taken advantage of, and there is nothing wrong in doing so. On the contrary, not doing so in training is making a disservice to the training partner.

There is a really simple rule to this, that can be observed in the documented history of fencing. The buckler and complex hilt were developed to protect the extended arm, thus reducing the likelihood of it being wounded either while on guard or while executing an action that requires extension. In the styles that don't take advantage of these benefits (any sensible ones at least) the arm is generally held close to the body while on guard, creating a single target that calls the opponent to cross measure, only reaching the deeper targets while potentially exposing his or her own sword hand in the process.

Some rule-sets deny the hand as a target, and of course this is fine. It can be done to increase safety where no adequate protection is available (maybe a stupid idea in a modern context, but was done historically), to make the fencing easier to watch by the audience or to simply emphasize certain techniques over others. This of course is quite arbitrary, but competitive fencing does not need to be simulation of combat. In my opinion it shouldn't be. 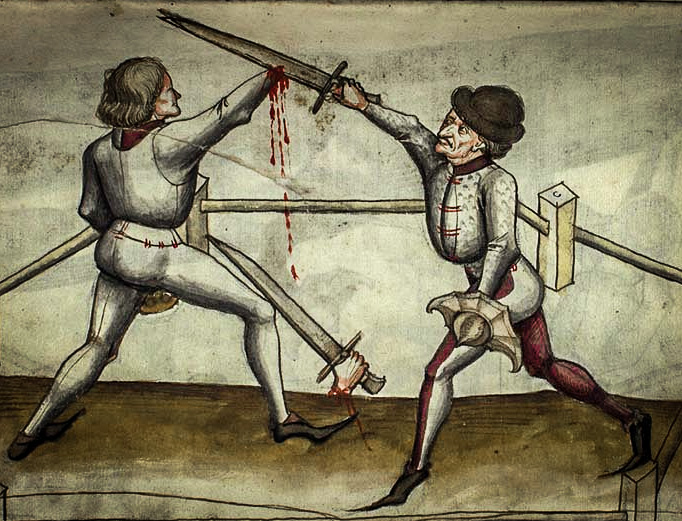 So in case it needs to be repeated: any martial art teaching the use of edged or impact weapons that does not consider the hand or the arm a primary target is likely to be -- in technical terms -- shit.